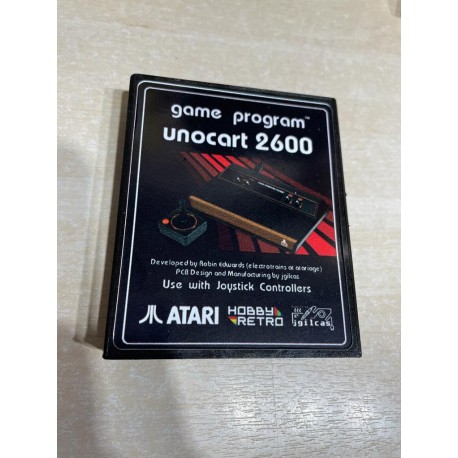 The UnoCart 2600 cartridge is an Atari Open Source multi cartridge emulator with cartridge support with up to 64k ROM and 32k RAM.
UnoCart 2600 operating mode

First, copy the BIN, ROM or A26 files to an SD card and insert into the cartridge. Use the joystick or the SELECT / RESET keys to navigate the SD card and select a title to play.

The SD card must be formatted as FAT or FAT32.
It works in PAL and NTSC systems.
It will also work on most 7800 machines (but will not run 7800 ROMs).

Note: All known versions, including SuperCharger files, are known to work. Most files, including Pitfall II, work fine on 99% of systems. The firmware has been tuned to ensure maximum compatibility.

The UNO 2600 cartridge will not work in any system other than a real 2600 or a clone. For example, the Retron77 is an Atari 2600 emulating on a chip that copies the ROM from your cartridge and runs it on your emulator. This is like most new systems.
UnoCart 2600 Firmware

The UnoCart 2600 firmware is open source under a GPL license. Although Robin is not working on firmware updates, we can find other authors such as DirtyHairy and ZackAttack in the AtariAge forums who have added some new functionality to the firmware, including updating from the SD card and support for the Pink Panther cartridge prototype.

You will need an ST-Link programmer the first time you update to this branch of firmware. Subsequent updates can be done simply from the SD card.
Credits unoCart 2600

Design, hardware and firmware by Robin Edwards (electrotrains at atariage)
Additional work on firmware by Christian Speckner (DirtyHairy at atariage)
Multi cart with SD card for Atari 2600 (based on my UnoCart design)
Atari UnoCart 2600 Video