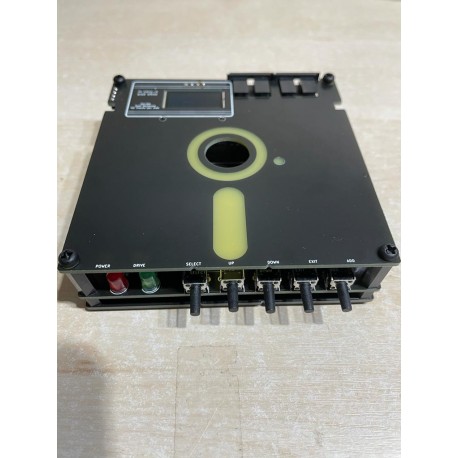 Paired with a rpiZERO, Pi1541 provides you with an SD card solution to use Commodore D64, D81, G64, NIB and NBZ disk images on real 8-bit Commodore computers such as:

The Commodore 1541 disk drive is a computer in itself. It consists of a CPU, a ROM, a RAM, IO devices and the drive mechanics. Due to the popularity of Commodore machines and the subsequent proliferation of software created for them, all kinds of exotic fast loaders and copy protection schemes were developed. As a consequence, a cheap, exact-cycle SD card solution has taken longer than other systems to arrive.
What does PI-1541-2 include?

The RpiZERO is not included
How is the Pi1541 different from the SD2IEC?

Unlike SD2IEC, the Pi1541 emulates one 6502 and both 6522s. Any code it is asked to execute is executed exactly to the loop. SD2IEC supports a limited set of fast loaders by trying to guess the fast loader from the code that is sent to it. SD2IEC will not and cannot execute the code, it only simulates the communication protocols. As a consequence, only a small number of popular fast chargers are supported. Since the Pi1541 can execute code on its emulated 6502 core, it supports a wide range of fast loaders (games and demo scenes), even copy-protected originals.
RPI Configuration

To use the Pi1541 you will need a Raspberry Pi 3B (or 3B+), an SD card, a cable, free firmware from the Raspberry Pi Foundation, and a valid Commodore 1541 ROM file.
The cable was designed to be as simple and cheap as possible.
SD CARD SETUP

Format an SD card to Fat32. It is best to use an SD card of 32GB or less.
Unzip the supplied zip file (Pizero123.zip) to the empty SD card. (This will create a folder called 1541 in the root folder of the SD card. This is where you can put your Commodore drive images and folders.)
Copy a file containing an image of the 1541 ROM (for example, vice-3.1DRIVESdos1541) to the root folder of the SD card. The ROM should be named dos1541 or d1541.rom or d1541II or Jiffy.bin.
Copy the images and folders from your drive to the 1541 folder which is now on the SD card.

Be the first to write your review!